RUINS: Behind the Scenes

From the initial collaboration on the music side of things all the way through video production with Darren and Jeremy, this project was one of my absolute favorites. So I wanted to give you a quick peek behind the curtain of the process... both the music and the video.

All BTS photos by @jacquelineday

NAMES YOU SHOULD KNOW
(AND PROBABLY ALREADY DO)

For those who have been following me for a minute, you know the name Jeremy Lutito. From our first moments collaborating from afar on Cody Carnes' music and videos 3 years ago... to a year long project working with him as the producer for my wife's masterpiece album Elle Azar here in Nashville... to other countless scores for projects in between... Jeremy has quickly become my absolute favorite composer and producer to work with. His unique approach, attention to detail, and love of analogue texture have always made it so easy to create visuals to. (And I'm not alone by the way - remember that Nike commercial that went viral this year? Yep that's him too.)

Then there's Darren King. And where do I even begin? Perhaps you remember him as the duct taped drumming madman from the band Mutemath. Or perhaps you recognize his hooks on Kanye West's "Real Friends"... or Travis Scott's "Piss on Your Grave." Whether you know his name or not, the fact of the matter is that Darren is one of the most talented musicians alive. He's responsible for some of the most inspiring drumming and production I've ever witnessed. And I've literally listened to him since I was 10 years old...

So you can imagine how unbelievably stoked I was when I got the opportunity to collaborate on this exclusive project with the 2 of them. This would be their first time working together... and of course the first time the 3 of us would work together. And I was beyond excited.

It all started with a phone call talking about the possibilities and potential directions together. And the thing I loved was that, rather than trying to nail a specific amount of songs... or even a specific genre or reference point... Darren and Jeremy wanted to just start "throwing paint at the wall" so-to-speak from a musical standpoint. To get in the studio together, start playing, finding what was inspiring to them day by day... and creating something fresh from that combination of ingredients.

At the end of the day, the beautiful thing about a collaboration like this is that you're automatically going to get something unique just based on the combination of the talents and perspectives involved. So the guys went away for a couple months and did their thing.

Jeremy's studio is filled with musical toys ranging from old synths like the Crumar to random percussive instruments to analogue effect pedals to process it all through like Space Echoes and distortion boxes. It's rarely "in-the-box" (aka MIDI based samples in Ableton) and almost never a hodge-podge of Splice samples. More often than not, both Darren and Jeremy utilize far more real organic sounds layered in unique fresh ways to further emphasize the haunting melodies and addictive rhythmic hooks they create.

Well by the end of it, the guys landed with about 30 "sketches" - different ideas, directions, and soundbeds to start building from. And then came the chiseling, the finessing, and the mastering down to 8 incredibly cohesive yet diverse tracks pulled into the collection.

All the while... I listened to rough demos as they sent them. And we started dreaming about what this could all look like visually.

THE VIDEO:
A HAPPY ACCIDENT

The video production process on this project ended up possibly being one of my favorites of all time. And truly, it was a bit of a series of "happy accidents."

We wanted to rent a massive LED wall. But due to the expensive nature of a shoot like that, we were also cramming a TON of different shoots into the 2 days we had rented it for.

Over the course of 36 hours in that space, we shot a passion project short film (*coming soon*), new masterclass content, and more. We pulled out all the stops - and landed about 8 hours of incredible footage. It was a dream team with all the toys you could hope for.

But I knew that we were going to push the limits on how many unique looks we could get out of the LED wall before it started all blending together and feeling the same.

So I started wondering how we could push our time with Darren and Jeremy to a new place (the final shoot of the 2 days). And rather than leaning on creating new tour visual content, I wanted to see how we could dress the set further... getting more depth and texture out of the room as a whole.

This all sparked a crazy idea inspired by one of my all-time favorite movies, Tron Legacy. Specifically the scene - "Flynn's Arcade." I've always loved the tone of that scene... the idea that all this incredible technology had been left to decay and sit untouched for that long. And from a production standpoint, the beautiful diffusion of the lights under the plastic drapes was such a unique approach that stuck with me since.

So I wondered how we could do the same thing but at a bigger scale. I loved the idea of draping such a massive and expensive piece of technology as an LED wall with plastic. Almost leaning into the idea of Ruins... that this technology would appear "impressive back then" if seen from the future after left to rot.

We pulled this set change off in record time thanks to an amazing crew including my team Ben Crosson, Matt Cross, and Jillian Cohen. And in the process, Jillian pointed out how incredibly cool it was looking having the scissor lift in front of the wall and the drapes. So we knew we had to figure out how to incorporate it somewhere in the night. 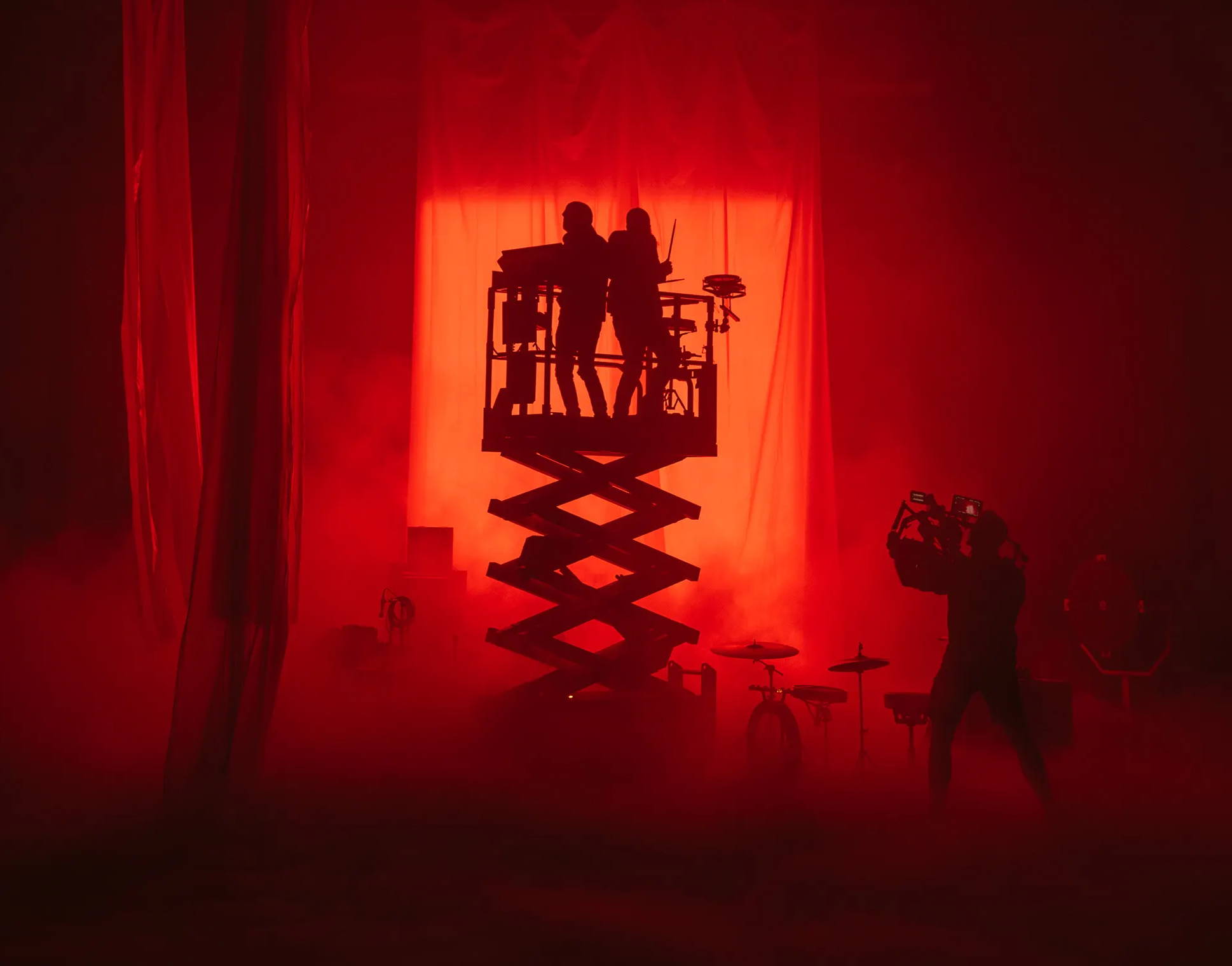 SHOOTING WITH THE EDIT IN MIND

From there on, it was really just a matter of letting Sam Wiley, Movi op extraordinaire, do his thing. And shooting with the edit in mind, our goal was to capture takes good enough for "oners" or single take music videos.. but that we could also of course chop into multi-cut edits as well.

And it was the final shot of the night that brought all the pieces together in their full glory. With Sam on Movi (after figuring out how to rig the guys' intstruments TO the lift)... Ben laying on the floor behind the lift operating the buttons manually... Kirk Slawek laying a thick bed of low ground fog and pulling focus... me manually triggering visuals from Resolume... and John Spencer running around with a leaf blower to kick the smoke up... the final shot of the night ended up being the absolute best. Right before the LED wall died! haha

At the end of the day, I couldn't be more excited about the way this whole project came together. From the first call to the final edit, this team was an absolute thrill to work with. I love remembering all the little details that brought this journey full circle in a blog post like this. And I hope you've gotten something out of it too...

I always love to hear any questions or thoughts you may have, so feel free to reach out over DM's on Instagram at @ezcohen.
And until next time, Happy Editing!